“The Scars that Give a Stone its Soul:
M.J. Anderson’s Ineffable Beauties” 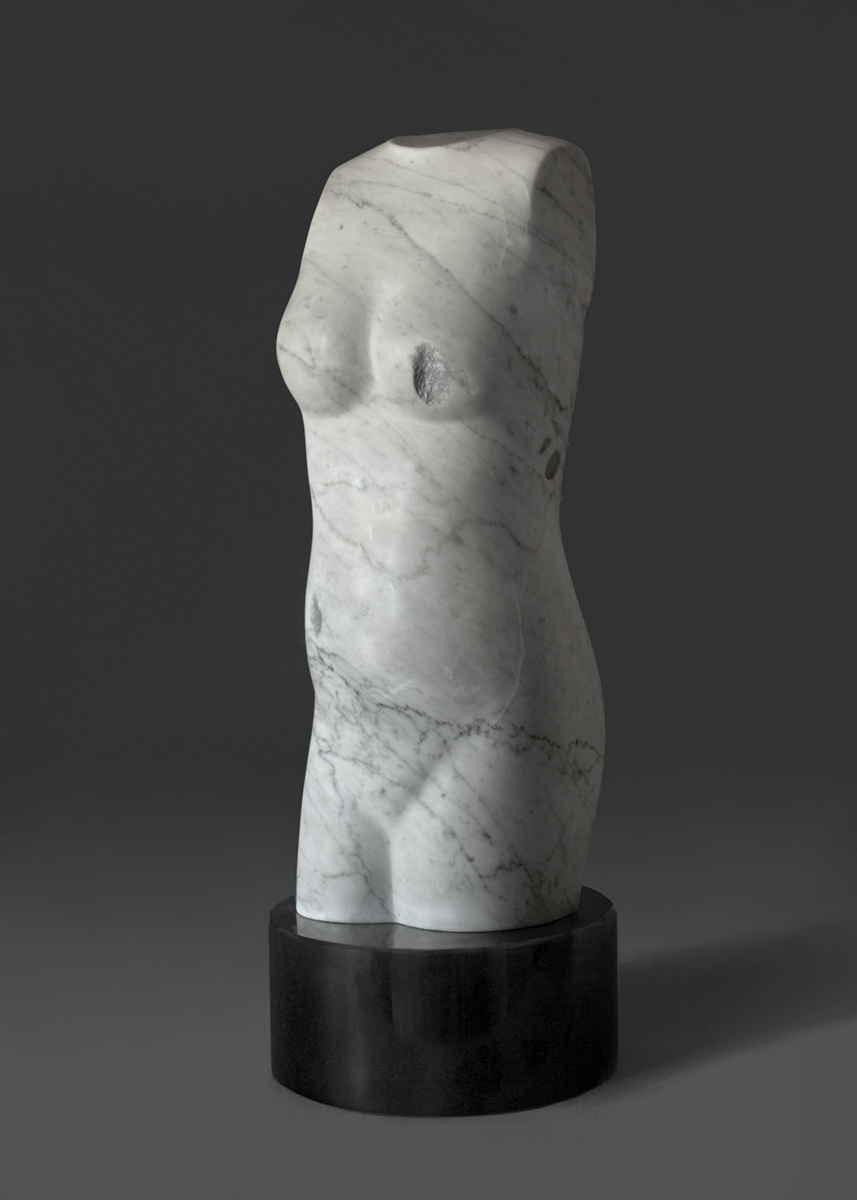 M.J. Anderson is an aficionado of all things Italian—she spends part of almost every year in northwest Tuscany, sourcing marble in Carrara for her abstract and figurative sculptures—so it’s fitting that an Italian opera aria would encapsulate one of her work’s central themes.  In the first act of Tosca, artist Mario Cavaradossi is painting a depiction of the Virgin Mary.  Although his sitter is flaxen-haired and fair-eyed, in his mind’s eye he pictures a different woman, the dark, raven-haired Floria Tosca.  How is it, he ponders, that two such contrasting archetypes can both embody the feminine ideal?  It is only through the magic of art, he concludes, that we may reconcile polarities and discover common ground in beauty’s wildly divergent iterations.  This is the very alchemy that M.J.Anderson has deployed in her career-spanning exploration of the human figure, especially the female figure, in all its intersections of physicality, symbolism, and politics.  It is an exploration that has evolved and circled back, variegating to the present day, where it informs her latest solo exhibition, To the Ends of the Earth, at Imogen Gallery in Astoria, Oregon—not far up the road from the coastal enclave of Nehalem, where she lives and works when not in residence in Carrara.

Anderson’s supple, thematically rich sculptures guide viewers through the cornucopia of what Camille Paglia has termed “sexual personae,” the collective unconscious’s endless storehouse of forms, guises, and the animating spirits that sit just beneath the sinew.  The sculptor trains her democratic spotlight on all manner of bodies, which variously recall the Venus of Willendorf’s totemic fecundity, the exaggerated svelteness of a Modigliani or Giacometti, and, more pointedly, the congregations of flesh, fat, bone, and blood that today’s culture might deem “average,” which is a wholly inadequate way to say:  natural, commonplace, shared, human, good.  Her aesthetic eye is inclusive, accepting, and compassionate, grounded in a lifetime of extravagant loves and losses, which score the cuts and smooth the curves of every piece she creates.

And what gloriously allusive cuts and curves, what nubby, gnarly, defiantly individualistic surface topographies animate her artworks!  She is a devotee of the anomaly, the irregularity ripping through a chunk of otherwise smooth rock, which other artists might disparage.  She honors the evocative imperfection of wabi-sabi, the scars that give a stone its soul.  Sometimes she gilds those scars with gold leaf to underline the nobility of pockmarks and pebbly textures, eschewing the precious and plasticine.  In her sonatas and symphonies in stone, from hand-sized to monumental, from house and bottle forms to major liturgical commissions, roughness wrestles with refinement, and the conclusion is never foregone.  One sees this in the striking 1990s-era series, Anatomy of Passion, its rosso laguna marble the oxblood hue of our shimmering insides, its organic, vaguely disturbing shapes evoking aortas, valves, chambers, stylized genitalia, unglimpsed tunnels ridged and pulsating.  Works from this vintage were more overtly political, addressing personal, political, and social topics including breast cancer, refugee crises, and humanitarian concerns around the world.  Her more recent abstract forms are a response to global climate change and the troubling impacts of drought and population growth on drinking water and other natural resources.

The conceptual viewpoint in the Torso sculptures, which have become her calling cards, is more subtextual—embedded, not emblazoned.  They do not polemicize, they suggest.  They do not indict male chauvinism, for example, so much as they invite alternative ways of thinking.  Alternately bulbous and streamlined, some harken to ancient matriarchal imagery endemic to Africa, Asia, and the Pacific islands; others to Etruscan and Greco-Roman statuary.  They confront us straight-on, sturdy, implacable, without recourse to contrapposto or other tartings-up, no nipples needed nor nether bits to distract from the figures’ essential shapes, although some do lean back as if in sybaritic repose.  This multiplicity of varied forms would seem to point to the radical body acceptance and reclamation we associate with second-wave American feminism, but Anderson qualifies her own credo as less prescriptive, perhaps more European, a “feminism without boundaries.”  As a child she was instilled with self-respect and a roll-up-your-sleeves work ethic that never kowtowed to a man’s blithe entitlement.  From her women role models and mentors she has gleaned enormous respect for the physical and emotional strengths and sacrifices women embody despite systemic disenfranchisement; their pivotal roles in advancing civilization from nomadism to agrarian society; their pacifism and consensus-building countering the mercenary tactics and outright violence of toxic masculinity.  The Torsos are rallying cries for women’s power, intense but self-possessed, regal with quiet authority and authenticity. 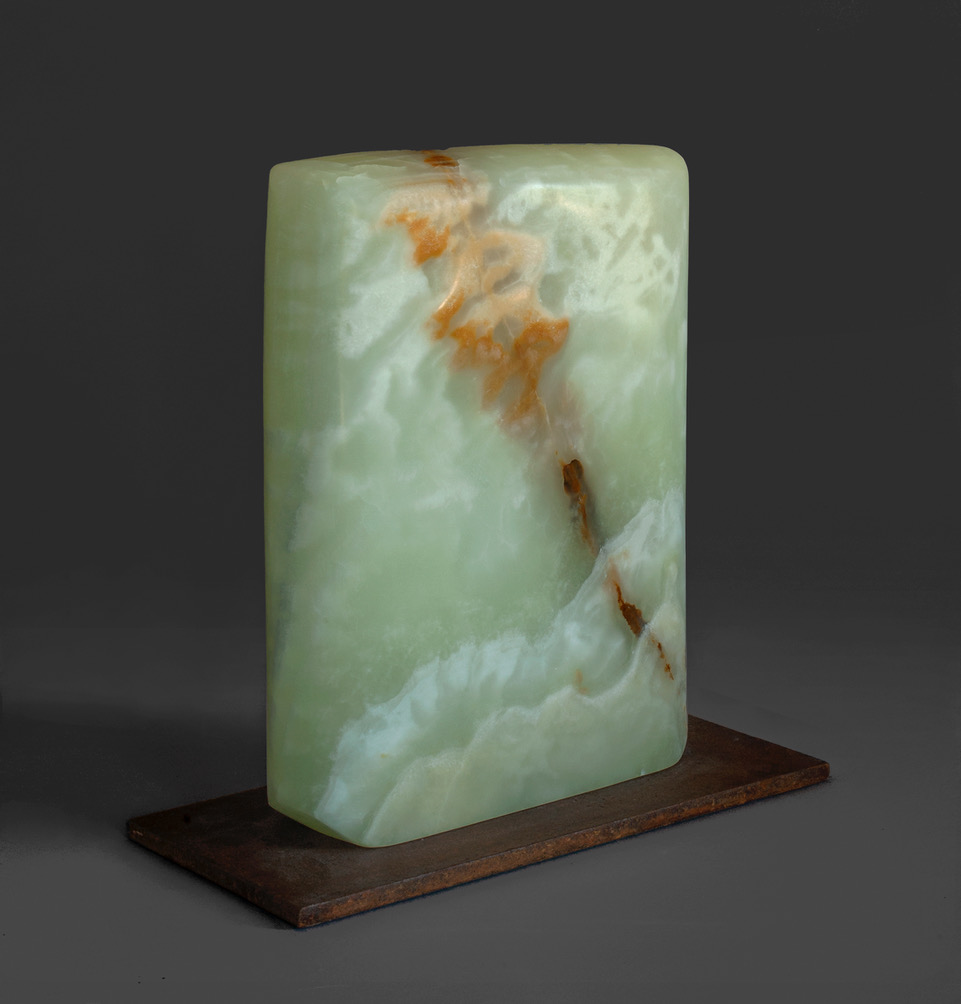 Other works, such as the early onyx series called Bacino (Italian for well/basin), also reference women’s cultural importance and the potency of the womb as metaphor.  “Women are the vessel,” she says.  “The woman is the holy well, the basin that gives and sustains life.  That idea is very important to me.”  In her ongoing Petrified Water series in green onyx, she references reservoirs, oases, and sacred wells in Celtic traditions and the folklores of Native America, Africa, and the Middle East.  The motif resonates with her not only in the sense of vessel-as-body, but more broadly of Earth itself as an oasis, a floating blue marble of life in the cold void of space.  Her reverence for this planet and all it subsumes manifests in her underlying respect for her metamorphic medium.  “Marble was once alive.  Marble was made from dying coral reefs and sea life billions of years ago.  It was compressed and transformed by incredible heat, then lifted up into mountains by the forces of geology...  Some stones have smells, so when I’m sculpting, I’m handling and smelling something that once was alive.”

Born in Portland, Oregon, educated at St. Mary’s Academy and Portland State University, Anderson has always worked fluently with her hands in the physical world.  She learned to crochet at age five.  In kindergarten she used hammers, nails, and saws to make toy boats.  Soon she was cooking and baking.  She worked day jobs as a nanny, a waiter, a bridge-tender, and a dairy farmer.  As an emerging artist, her first foray was not sculpture but textile art.  The unifying thread in these pursuits was a comfort and skill in the messy realms of matter.  Maya Angelou’s credo, “Nothing that is human can be alien to me,” applies.  It follows, then, that Anderson’s lifelong loves—marble, onyx, travertine—are not handmaidens to her process but partners who are sentient, loquacious, and demanding.  “Usually the stone tells me what it wants to do,” she says, “and my own emotive life at the time tells me where I’m going with it.”

Sometimes that dialogue lasts for years, for although she sculpts in the requisite three dimensions, she also works across the fourth dimension of time.  Her preparations in Carrara—inspecting great blocks of marble, selecting Asian onyx and travertine from importers, collaborating with artigiani (artisans), often waiting a year or two for crates to ship and clear customs before arriving at her Nehalem studio—directly impact each finished sculpture.  In Italy, surrounded by masterpieces of the past, she essentially sculpts into the future.  And what a place Carrara is to live and work, to eat and drink and festigiare con i compari, especially for a girl raised Catholic in a family with Italian-American friends, who collected Italian stamps and postcards, and who (a Francophile before she became an Italophile) listened to Edith Piaf and Georges Moustaki, first learning French, then Italian.  In 1974, when she first traveled to Italy, it felt like a second homecoming.  She returned eight years later to visit Carrara, then again in 1984 to establish her enduring practice there.  Working with the region’s artists and artisans, she found amiable rapport and a shared devotion to an uncommonly demanding and physically taxing artform.  As she and her colleagues only half-jokingly observe, stone-sculpting is more an illness (una malatia) than a calling.

Inhabiting a physical and psychological space midway between the Mediterranean Sea and Pacific Ocean—the conceit undergirding her To the Ends of the Earth exhibition at Imogen Gallery—has inevitably imparted an ambidexterity to Anderson’s aesthetic orientation.  She floats across paradigms.  Although attuned to the figurative, biomorphic, and abstract work of 20th Century icons like Brancusi, Moore, and Noguchi, she has been more directly influenced by medieval altarpieces, Käthe Kollwitz, and Manuel Neri.  These disparate influences, folded into her own lived experience, guided her to the lodestar of her own practice:  a never-ceasing quest to capture the ineffable.  Her finished sculptures testify to the ways in which an intuitive and restlessly inventive artist can part the veils that divide the material world from the metaphysical.  The sculptures are exquisite objets d’art but also emblems, signifiers, and most enigmatically of all, presences.  Many collectors think of the Torso figures as companions, witnesses to the comings and goings of domestic life.  They infuse space with the Eternal Feminine.  “I’m Every Woman,” they sing:  the humble and the privileged, the unheralded and celebrated, the quotidian and numinous.  “When I make sculpture,” she reflects, “I’m making artifact.  I’m making work out of material that’s going to last.  It’s leaving a mark, an acknowledgment, a sacred object for the future.”

Richard Speer is an American art critic, curator, and author whose essays and reviews have appeared in ARTnews, Art Papers, Artpulse, Visual Art Source, The Los Angeles Times, The Chicago Tribune, Salon, and Newsweek.  He is the author of dozens of books and catalogues, among them “Halley/Mendini” (Mary Boone Gallery), “Echoes Among the Tides” (Centre Picasso), “Matt Lamb:  The Art of Success” (John Wiley & Sons), “Eric Wert” (Pomegranate), and “The Space of Effusion:  Sam Francis in Japan” (Scheidegger & Spiess).  He has curated exhibitions at the Los Angeles County Museum of Art, the Jordan Schnitzer Museum (University of Oregon), and Verum Ultimum Gallery (Portland, OR).  For more information, please visit www.richardspeer.com. 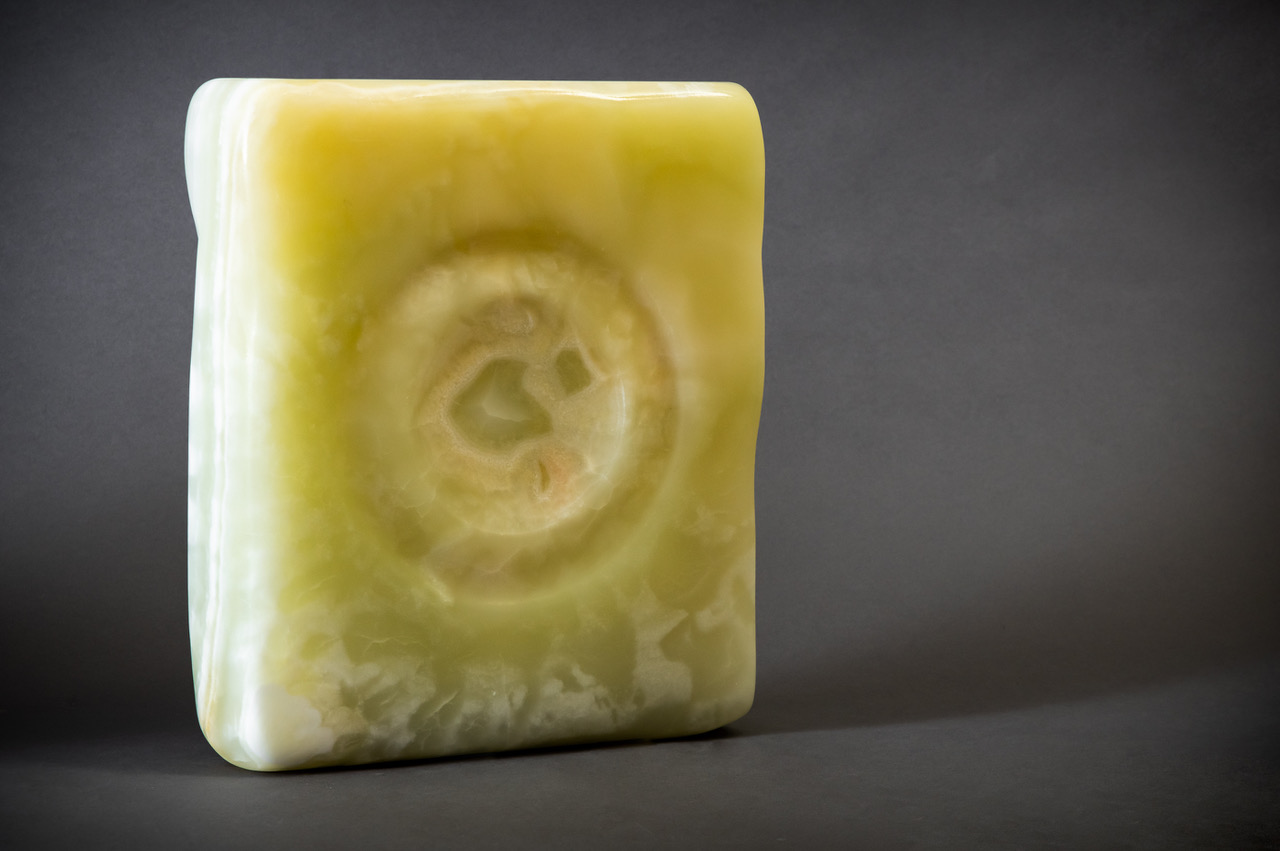